The Shaman has been around for a long time, so long, in fact that the name we given them is only a few centuries old. A Dutch traveler brought brought the word to Europe in 17th century. He reported his stay and journeys among the Tungusic and Samoyedic-speaking indigenous peoples of Siberia. So to define Shaman is hard. Every ancient culture around the world had their particular version of Shamanism. 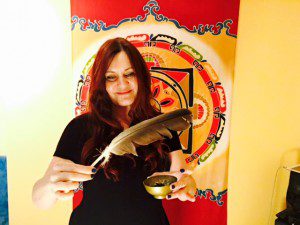 One modern parallel we can draw is pointed toward psychologists. The Ancient shaman was not just a dream seer, the shaman was the village shrink, so to speak. Not only did the shaman go on shamanic journeys to the spirit world, to find and bring back power animals, the shaman would use tokens. The tokens were small and symbolized the evil spirits that he or she would draw out of the inflected.

Seeing the token the inflicted would believe the evil removed, and thus healing could begin. This is similar to a psychologist who prescribes sugar pills to their patients. Healing works though the placebo effect. The Shaman as know this wisdom from the beginning of time. Much of what the Shaman did was based on easing the villagers minds, bringing peace.

How Else Can We Define Shaman?

Traditional the Shaman was held the office of highest spiritual advisor. The Shaman presided over the healing rituals. They lead seasonal ceremonies to help with framing. The Shaman saw visions to protect their people from enemies. They might be a village elder or a chief, and carry a sacred drum. They could do soul retrievals, fortune telling, and storytelling. The Shaman imparted great wisdom through teachings, just like Daniela.  If you want to do a Shamanic Journey, click here now: How To Do A Shamanic Journey  let your journey begin!
[whohit]Define Shaman: The Village Psychologist, And Way More[/whohit]