When you have a problem or conflict someone might ask you what you intended to do about it. Shaman Magic Spells need a catalyst, an intention. A catalyst can be defined as: something that causes activity between two or more persons or forces without itself being affected. So what you intend to do to solve a problem is the catalyst. Intention is a powerful force that gives magic its spice. 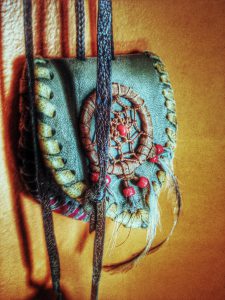 Voodoo works because those who have a spell casted upon them understand the witch doctors intention, and believe it will have a effect on them. And there are cases of Voodoo followers dying for no apparent scientific reason after being cursed. In this case they believed that the intention of the curse was enough to do the job.

In Tasmania, historian Ian Evans carried out the Tasmanian Magic Project over two weeks at 30 historic properties in the state’s southern midlands. Thus, he found out that an ancient English horse union brought with them shamanic magic to protect colonists barns from ill-fortune. Several ritual burn marks where found in old barns meant to ward off ill-fortune and fire.

The “magic marks” took various forms, such as circular scratchings known as hexafoils, and were used by European settlers as protection from “evil”, most likely attacks by bushrangers, absconded convicts and Aboriginals.

If the spell is meant to ward off enemies who believe in both the symbols and the intention, they will stay away from the property, keeping the occupants save. In this practical way Shaman magic spells work.

But there is a third element: the magic of life itself.

I’m not saying there isn’t more to the inner workings of magic. Biocentrism says that all of reality, the world around us, is created by consciousness, and thought. So the mere thought of something can change the results of what we measure, bringing those result into reality. To me this sound similar to creating something through intention. But it’s more than just intention.

In conclusion, magic works because we want it to work, and the magic of our inexplicable existence makes it happen. Why don’t you try some shamanic magic now? Take this try course for FREE mini Click HERE NOW! The secret catalyst for Shaman magic spells is you!
[whohit]Shaman Magic Spells: The Secret Catalyst[/whohit]