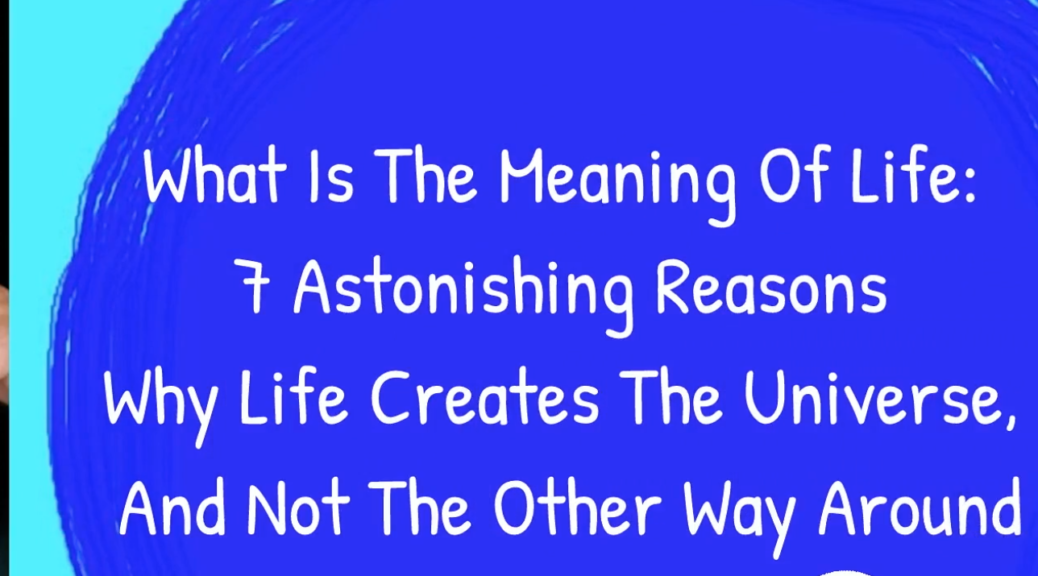 What Is The Meaning Of Life: 7 Astonishing Reasons Why Life Creates The Universe

What Is The Meaning Of Life? Click now: https://gatelight.zenler.com/ Biocentrism says that the separation between the universe and the one observing it does not exist at all. Robert Lanza’s theory is the closest science that aligns with many philosophers, sages, and spiritual gurus throughout the ages, who have tried to describe the universe when asking the age old question: what is the meaning of life? In the simplest terms Lanza says that if it can’t be perceived it isn’t real. A physical universe outside consciousness is simply not out there. So if life creates the universe, then isn’t life itself creating all of it’s meaning? Much of Lanza’s observations are based on quantum experiments.

So let’s look at 7 astonishing reasons why Life Creates The Universe: To answer your question: What Is The Meaning Of Life?

Everything we perceive with our senses, is just a cosmic construction of consciousness. A rainbow does not exist, nor does the sound of a tree falling in the forest without a biological creature to use it’s eyes or ears to perceive these events. A tree pushes air when it falls, and an ear must be present to receive it. An eye-brain system must be present to complete the geometry of a rainbow. No observer: no event.

External and internal perceptions can not be separated, both are happening inside of consciousness. They are fused together and intertwined. The stuff going on outside of us, is actually happening within our own minds. Everything outside, or inside of us, which we sense, or perceive, are frequencies, filtered through the vast labyrinth of neurones in the brain, and thus exist only within this mysterious thing called consciousness.

What Is The Meaning Of Life number 5

Without a conscious observer, at best, everything that makes up the universe is just a massive mess of quantum silly puddy, Because subatomic particles act according to the one observing them. Quantum physics has proven, many times, that if a measurement is not made by an observer, a subatomic particle does not actually exist in a definite location.

What Is The Meaning Of Life number 4

If life isn’t around to build a funhouse of time and space, a universe that may have come before it was just a faceless embryo of potential. Researchers have proven that an atom cannot change its energy state if it is being continuously watched. In one experiment atoms meant to reach a higher energy state did not do so, because the scientist kept checking the atoms, every four milliseconds, with a burst of laser light. This act of measurement forced the atoms back, against the force trying to propel it into a higher state. It would seem that the observer kept the atoms in check to give them form and meaning. What Is

The Meaning Of Life number 3

The universe is perfect for life, because life creates it. The universe is the image of the self, locked in time and space. According to science the universe is the perfect place for life. They call it the Goldilocks Principle! Yet this cosmic porridge happened randomly. Meaning although life stood in front of a firing squad, not one bullet hit its target: There are way too many coincidences. For example the universe’s four forces and their constants work perfectly together to make stuff like atoms, water, entire planet’s, and life. Just change one of the forces, just by a fraction, and life would never have had a chance to exist in the first place. If a Universe is created by life, then a universe that doesn’t allow for life, could not possibly exist.

What Is The Meaning Of Life number 2

Time is just the way life organizes reality into events. Stringing them together gives the illusion of forward motion, time is relative only to the animal perceiving it. Time is just an agreed upon rhythm like a clock, or the changing of the seasons. It is in fact wholly subjective to the creature observing it. There is no scientific proof that time exists. Time is just a subjective measurement of objects. What Is The Meaning Of Life number 1 Space and time do not exist without the observer. Space and time is the grammar consciousness uses to describe the universe. There is no independent physical universe of time and space where things happen without life. An experiment was done in 2002 where a photon was cloned into twins: p and s. The idea was to determine their paths through 2 slits. When observing the experiment, It turned out that s knew what p was going to do before it did it. This suggests that space and time do not exist if separated twin photons act on information before it happens; and that knowledge, known only by the researcher, is the only thing that determines how these bits of light or matter behave.

What Is The Meaning Of Life then through Biocentrism? The meaning of life is the meaning you give it, because everything in the universe just doesn’t exist without you. Click now https://gatelight.zenler.com/