The most amazing aspect of No Man’s Sky, for me, is not the game mechanics. I love the spiritual sense of being part of something bigger. While playing this game, it feels like living in a spontaneous virtual moment. It’s incredible to discover this spontaneous universe. It’s always changing randomly right before my eyes. This game can be so chill, that it’s likely to lower my blood pressure.

If You Don’t Know What No Man’s Sky Is, It’s A Video Game

But not just any video game. It’s an independent, incredibly unique video game. 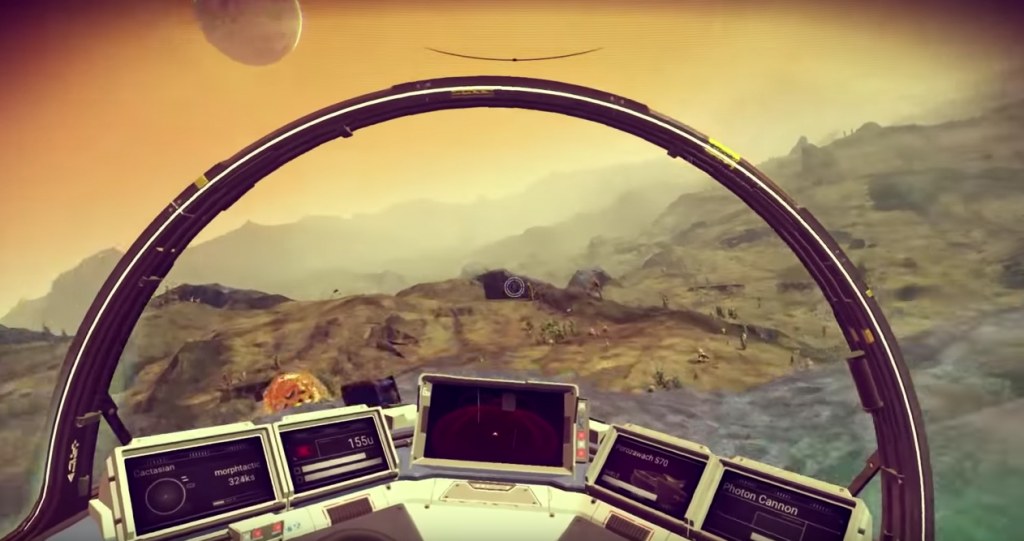 This means the game’s landscape is generated, not by an artist’s software, but an algorithm. No Man’s Sky is so complex and sophisticated that is can create tens of millions of planets that comprise the universe. Most planets are unique.

Each is generated as the player discovers it. Each planet is subject to the laws of its respective solar systems, and vulnerable to natural erosion. Not only that, vegetation, and alien creatures populate these amazing planets. Although somewhat similar, each are always different. They too are procedurally created.

They say that to visit each and every planet that this mind boggling algorithm can create, it would take the player millions of years.

Sadly, There Has Been Lots Of Trouble Ever Since This Game Was Released

The small, yet brilliant team that somehow created this miracle, were forced to release the game before it was ready.

Their PR strategy, or lack thereof, also unleashed the grumpy genie of ramped imagination.  Millions of gamers imagined a game that did not exist.

There should be great empires of lost civilizations to discover, and planets like Middle Earth, and medieval worlds, and worlds filled with monsters, aliens, and dystopian planets, the planet of the apes, anything should be possible! An imagination unchecked is sometimes a dangerous, ravenous beast that can’t be satisfied. Thus, when the game was released, falling short of exceptions is an understatement. This game Went from riches, to rags in a few short weeks. I think its now headed to riches again…

The strange thing about those players who demanded their money back, played the game, on average, for at least 30 hours, some hundreds of hours, before they realized there was nothing more to do.

Being objective, there are AAA priced games out there that do not offer 30 hours of game play.

This is interesting, because it tells me that many people, whether they hated the game or not, were put under a spell when they started playing it.

Most people weren’t even aware this was happening. But what is this spell? Simply said, it’s the spell of living in the moment, and experiencing a universe being born spontaneously right before our eyes!

Oh my God! No Man’s Sky is not a video game, it’s a form of quantum creation, through the simple action of playing it.

Thus, the player becomes the author of the game as it progresses, even creating the storyline itself. That’s a hard thing for lots of gamers to grasp, because they’re so used to being spoon fed content, quests and storylines.

I don’t blame them, and they’er right in thinking the game is slow and repetitive.

The trick to enjoying No Man’s Sky is stopping and smelling the roses, so to speak. Their are so many incredible visual moments, when standing on the brink of a celestial vista, and gazing up at gigantic, looming planets from the ridge of a moon, that it’s worth playing the game just for that.

Yes, the spiritual sense of being part of something bigger is truly awe inspiring!

For Me No Man’s Sky, Especially After The Foundation Update, Is Pure Magic

Sometimes when exploring planets surfaces, either in my space ship, or walking around it, I can see the procedural magic generated right before my eyes. The world I’m on is materializing right in front of me. It’s like God is magically creating the universe just for me. It’s really quiet inexplicable, and reminds me of the quantum physics theory that nothing exists until we observe it. Yet, because I’m zooming forward across the grand vista, its exactly this action I’m taking that is making the universe come to life. In a way I feel like God.

No Man’s Sky is a spiritual experience.

Not only is it one of the most relaxing games I have ever played, it’s whole concept is about living, exploring, and enjoying the moment. Its like a spiritual retreat. Because the game is created in real time, and not even the creators of it fully understand what kind of universe will be created. The game map, so to speak, is spontaneously created right then and there for each player.

No two galaxies will ever be the same. Every player will experience something different. The pacing of this spontaneous game of discovery is so serene, so laid back, that when I’m done playing, I feel like I’ve been meditating for hours. Take this FREE meditation online course and chill right now!

No man’s Sky is still almost a blank page. The Universe that may exist, and can exist, and will exist within, can be one of our wildest imaginations! Our spiritual retreat has only just begun.
[whohit]Why Is No Man’s Sky A Great Spiritual Retreat, And Best Game Ever Made?[/whohit]