The drum was unlikely a musical instrument in the beginning, but more of a sacred tool of the shaman. It’s not allowed to touch the shaman’s drum. Shamanic drums are sacred, and it’s magic is connected to the one using it. Some of the first drums ever found go all the way back to around 4000 BC in Egypt.

They were made from the skin of the alligator; and drums have been located in China, which date back to 5500–2350 BC. Drums were used, according to recorded history, for ritual in shamanic ceremonies.

But I’m sure drumming goes way further back than just a few thousand years. The French cave paintings, the oldest known to man, suggest shamanic ritual. So it’s likely that drumming was also part of prehistoric shamanism. Perhaps the shamanic drums go back even further. The origin seems to be an instinctual aspect of animal behaviour. 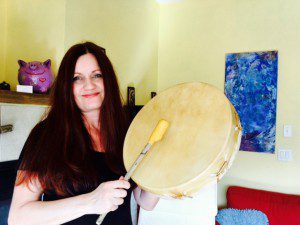 Some apes drum with their chests, or clap their hands, the Macaque monkeys drum objects in a rhythmic way to show social dominance. Apparently this is like vocalizations, which means drumming is part of the evolution of social communication.

Truly, the shamanic drum is deeply rooted in our primordial consciousness, which we still carry with us, if not in our early lizard brain stems. Later, primitive man developed a way of communicating over long distances, using loud drum beats, being the first wireless system, so to speak.

The point is that drumming is a natural way of communication, and the catalyst that connects living beings with each other, and the universe. The rhythmic beats create a resonance with a frequency that is inescapable, because not only can you hear it, but you can feel it vibrating. Some of the most powerful shamanic drums are connected to a shamanic journey. Embark on your shamanic journey right now!
[whohit]Shamanic Drums: Did They Come From Animals?[/whohit]